Now I get it @ptsouros 🤪🤪🤪 I am passionate about #art. : #eventidelove : : : #pablopicasso #myquote #artworld #passiontwists #livewithart #eventidelove #emotionalabuse #sexandart #amwriting #psychologicalthriller #psychological #artquotes #absolutelypatsy #ptinstaart
“Love is like war: easy to begin but very hard to stop.” Follow for a true story of emotional abuse as a psychological thriller.
I am obsessing over my book draft. To paraphrase a quote by F. Scott Fitzgerald; “I feel like I am swimming under water and holding my breath.” I read and read it but I can’t let it go as finished. #eventide_love : : : : #amwriting #emotionalabuse as #psychologicalthriller #mystory #writingchallenge #gaslighting #hitchcock #davidlynch #creativewritings #blogto #bookshelves #bookquotes #myblog #truestory💯 #lovindublin
‘Dark Star crashes, pouring its light into ashes… Mirror shatters in formless reflections of matter… Shall we go, you and I while we can… Through the transitive nightfall of diamonds…. ‘ : : Eventide Love is my story of emotional abuse as a psychological thriller. : The protagonist relies on mental resources rather than physical strength to overcome his victim. The conflict is played out through mind games, deception, and manipulation, with sustained attempts to demolish the victim’s mental equilibrium. #eventide_love @ptsouros : : #psychologicalabuse #psychologicalthriller #emotionalabuse #blogto #book #mystory #creativewriting #safeireland #amwriting #gaslightingawareness #hitchcock #davidlynch
“At that very first kiss I felt something melt inside me that hurt in an ethereal way. All my longings, all my dreams and sweet anguish, all the secrets that slept deep within my soul came awake. I felt the narcotic sensuality of Maryvn Gaye’s lyrics playing inside my heart in perfect harmony with life.” #eventide_love #emotionalabuse as a #psychologicalthriller : : #amwriting #mystory #psychologicalabuse #creativewriting #hitchcock #davidlynch #relationshipsgoals #badlove #marvyngaye #myquote #publishing #metoo #metoomovement #womenempowerment #ireland🍀
Emotional Abuse as a Psychological Thriller. Link in Bio: : There were many shades in the danger of adventures and gales, most of which were exhilarating and golden. It is only now and then that there appears on the face of facts a sinister violence of intention- that indefinable something which forces it upon the mind and the heart. It is this complication of incidents, or these elemental furies coming at me with a purpose of malice, with a strength beyond control, with an unbridled cruelty. And this means it tears out my hope and passion. MY pain of fatigue and longing for rest targets destruction, annihilates all I can see, known, loved, enjoyed, or hated; all that is priceless and necessary- the sunshine, the memories, the future. My precious world as I knew it sweeps utterly away from my sight, further and further as each day goes by, it’s simply an appalling act of losing my life.” #eventide_love : :: #emotionalabuse as a #psychologicalthriller #artwork🎨 @darren_crowley : : #amwriting #mystory #psychologicalthriller #hitchcock #publishing #psychological #womensaid #lovindublin #blogtobook #lifeblogger #davidlynch #reesewitherspoonbookclub #womenempowerment #emotionalrollercoaster 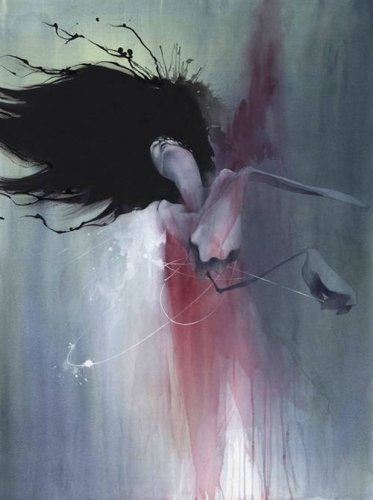 As she runs faster and faster, her gut tells her it’s in vain. Her sides are burning, begging to rest. Her hair clings to her face and neck, slick with sweat. He is getting closer. It’s so dark, the only visible light from the cracks and crevices in the walls: a dim green glow adds to the terror. She screeches as he grabs through the air and takes hold of the shoulder, and he pulls her hard. The change in velocity causes them to both fall on their backs. He immediately gets up and lifts her up by the roots of her hair; her screeches resound all around them. She struggles to regain her footing. He takes hold of both her shoulders in an iron grip.

“You can never escape.” His voice stripped of all care and love he once showed her. With his other hand he grabs her face and turned it toward him forcing her to look straight into his eyes. She shudders as she is finds herself looking into the eye of the devil; her prince of darkness. From the corner of her eye, she sees a pile of rubble, if she stumbled over it she could most certainly plummet to her death and away from this torture.

Alike woke up screaming. It was bloodcurdling, throat wrenching scream of pain and suffering. Gasping for air her mouth open she finally sucks in as much air as she can. Deep guttural sobs racks her body.

“I am alone and no one can save me.” Her thoughts terrorize her mind. Her body drenched in sweat.

Chris enters the room, “Aliki, you screamed.” his voice is urgent.

He lay down beside her on the bed and took her in his arms which starts to calm down; her breaths long and shaky become calmer and match that of Chris. He cradles her in his arms.

Aliki begins to acclimatize to her waking; her senses heighten. She suddenly realizes who is cradling her, and she pushes away from Chris’s embrace.

“I am okay.” her body trembling she swallowed hard and looked away from Chris.

“Why did you scream in your sleep?”

Aliki glanced at the window from which a stream of light beamed thought a tiny gap in the curtains. She could not tell Chris, how terrified she is of them, of their relationship, of his power. Every time she challenged his behavior, he came onto her even stronger and the abuse more intense.

“I don’t know. Maybe I had too much Chablis last night, and it played on my mind. I am okay honestly. Don’t worry about me.”

Her feeling that the whole time he was lying to her, playing with her, was eating into the little bit of sanity she retained. She had momentary senses that what was going on with her was not normal. Everyone she knew her friends, her family, her work mates, everyone she passed on the streets, spoke to in the shops encountered in daily life she viewed as aliens. Since she met Chris her life slowly, insidiously disentangled. She was estranged from her life bound totally by Chris. Her world was hostile and difficult, and she was losing her footing her ability to get away from Chris.