“Sometimes there are no winners at all. And sometimes nobody needs to lose. I like characters that have strong facades and then have secrets. They have cracks.” 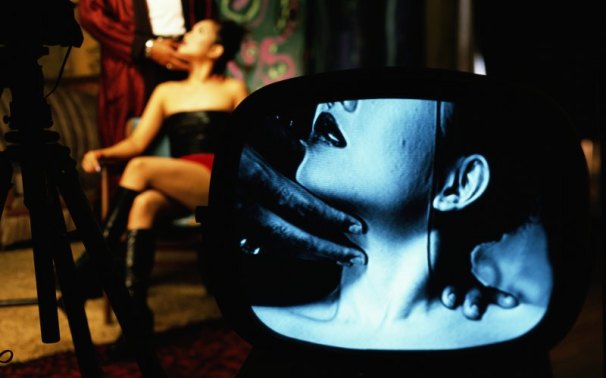 Aliki pulled into the dusk of the driveway. Weary, switched off the lights, released her seatbelt and eased herself out of the car. She shivered from the gentle breeze, which carried a late evening cold air coming from the Irish Sea. She clicked open the boot, picked up a brown paper bag filled with the night’s dinner. She walked to the front door and placed the key into the lock turned it and pushed open the solid wooden door, slamming it shut behind her with the base of her shoe. She threw the keys back in her bag dropping it to the ground. The place was dark the alarm was beeping. She lunged at the control panel slamming her fingers on the buttons punching in the security numbers to disarm it. She was alone in the house. She made her way to the kitchen dumped the bag on the work counter letting out a sigh of relief; her heart calmed in the duskiness and quietness of the house. Then she jumped as she heard the voice of the man that haunted her mind, she let out an involuntarily little scream.

Chris asked casually but laced with the cold tone of a threat, a tone she had heard many times before. She turned slowly, disturbed by his presence and unsure of when he arrived or how to provide him with an answer that he would accept as plausible. As she faced him, she gathered the courage to look him straight into his eyes to match his gaze. Chris was standing at the far end of the room against the floor to ceiling glass doors which when open drew the garden into the kitchen. The moonlight illuminated his figure and casted a silhouette along the high shine black marble floor, his face shadowed in the dullness of the darkness.

Taking a deep breath, she moved towards Chris deliberately taking each step not shifting her eyes from his. She stood before him, and then she gently, brushed his cheek with her index finger moving her finger along his mouth. She leant in and kissed his lips, his tongue. Trying to appease Chris she appeared calm, still caught in his gaze but her mind was in turmoil. The turmoil now dominated every moment of her life with Chris. She moved her body closer to him; her kiss more forceful. He remained still and motionless. She softly caressed his groin, rubbing the palm of her hand over his penis. She was desperate to move his madness at her to madness with her. Fucking him, giving him what he wanted was her survival mechanism.

Suddenly, one of his hands roughly took hold of her face. His grip was tight, sending a sharp pain into her jawbone and the back of her skull. She grabbed his hands trying to pry them away and struggled to escape the grip. He swung her around smashing her against the glass window. Her body shuddered from the impact. Angrily, his rage boiling over he pressed against her body. She could feel the darkness encompass him, take over his mind and body. He let go her jaws and in a flash he hooked her in his grip one hand on her shoulder the other on her vagina, the full weight of his body against hers.

“How many times have I told you not to talk to that bastard? You are mine. Accept that and I will make you happy. Don’t aggravate me anymore.

“I was not with him. I was in the supermarket and got delayed just messing around. I promise.” Aliki trembled

“Stop the lies.” He growled

“I am sorry; I love you. Only you. I want to be yours and only yours. Please I am sorry Chris.”

“Let me show you how much I love you.” she pleaded.

The alternative was too much to bear.

With the lights, not turned on yet, in the radiance of the night, Chris silently and solidly unbuttoned and unzipped his trousers. They fell to his ankles; then he powerfully pressed her downwards. She knew what he wanted. On her knees, she pulled his underpants down took his hard penis in her hands guiding it to her mouth. He placed his hands behind her head and thrust deep into her mouth hitting the back of her throat. She gagged, her eyes watered, but she knew not to pull back. Mercilessly and intensely he fucked her mouth. Her body was trembling from the force, her strength wearing, her nose streaming from the enormity of his hard-on hitting against the back of her throat, stifling her breathing. He was groaning and gasping

He thrust his cock deeper; she tried to pull back, but he would not give her any leeway. Suddenly he pulled out; she gasped for air, and he hoisted her up by her hair she let out a soft shriek of pain.

“Lie on the floor.” he gasped as he kissed her passionately.

She lay on the floor.

“Open up your legs so I can see your pussy.”

He said urgently as he masturbated over her.

Aliki fingered her clit just as Chris liked. Rubbing it hard looking up at his penis waiting for him to come all over her face. She groaned loudly as she rubbed her clit harder and harder, the blood rushing through her veins her desperation heightened. She reached orgasm, after orgasm just as Chris liked her entire body convulsing.

Chris pulled up his pants handed her his hand that she took, and he pulled her up. As though nothing had happened he kissed her gently and lovingly guided her toward the sink. He turned on the tap, took out a clean towel from the drawer and wet it with warm water. Then like his baby he wiped her sore eye and face whispering how much he loved her and how much she was a part of his soul.

“I can’t keep hurting you the way I do. I need to protect you from my mind. I am going to miss you so much.”

Tears welled up in her eyes. He swooped her up in his arms and carried her upstairs to the bedroom and laid her on the bed. Her heart was pounding; her body was shaking so much she did not have the fortitude to move, to escape this moment of Chris’s mind. He placed the weight of his body on hers. Buried in the tautness of his muscles against hers, the constriction of her chest under his weight, and the strain of his mood she took his face in her hands. She looked deep into his blue tortured frosted eyes imploring him to let her go. She focused on breathing not on crying.

“This is the only way you can be mine,” he whispered in her ear. There was something in the tensity of his voice that was ominous that gave out a warning.

“I am yours, please Chris believe me I am yours, I love you so much.”

Chris got dressed for work, in his usual dapper manner. He pulled on his grey jacket as he grabbed a slice of toast, which his mother had buttered for him. He said goodbye to his elderly parents after emphasizing to them that should anyone ask; he had spent all weekend with them.

“I was here all weekend. Okay. “ As always they agreed, knowing that their son carried many secrets that were best-kept that way.

“You haven’t killed someone?” his mother crooked jokingly.

He did not answer instead he twirled her in the air, and gave her a hug. She kissed him on the cheek. Then he hugged his dad reminding him to take his heart tablet at lunch time.

“I will be home as usual this evening at about 6pm mum to cook you your favorite dinner of salmon and mash potatoes.”

Meet the Author – On The Edge

On The Edge – The Book